Anaconda is an open source distribution which includes python along with hundreds of other python packages,libraries and modules.It works on popular OS like on Linux,Windows,and Mac OS.Anaconda is the data science platform for data scientists, IT professionals and business leaders of tomorrow. It is a distribution of Python,R,etc. With more than 300 packages for data science, it becomes one of the best platforms for any project.Hence, Anaconda is known as the Birthplace of Python Data Science. 1.Open Source: Anaconda is an open source software which is available in various programming languages such as Python.You could access  the open-source software for projects in any field, from data visualization to robotics.

2.User Friendly:Anaconda provides a user-friendly interface for their user.With its intuitive platform, you can easily search and install packages and create, load, and switch between environments.

3.Secure:Source code and built artifacts are maintained with strict chain-of-control and are built, scanned, and hashed on a separate secure network within Anaconda. Hence,Anaconda provides a safe and secure interface to their users to work upon it.

Head over to anaconda.com and install the latest version of Anaconda. Make sure to download the “Python 3.7 Version” for the appropriate architecture.

Downloading and Installing Anaconda in Windows

Head over to anaconda.com and install the latest version of Anaconda. Make sure to download the “Python 3.7 Version” for the appropriate architecture. Step 2- Go through the License Agreement 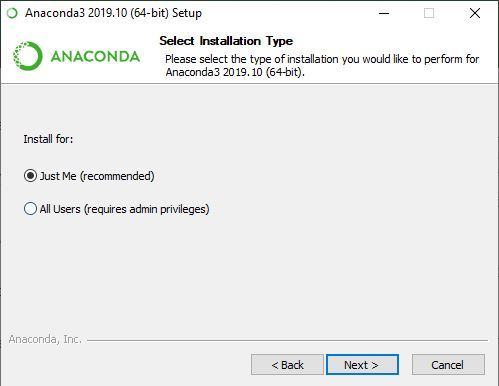 Step 5-Wait for Anaconda Installation in the system Step 6-Finish the Installation process by clicking the “Finish” button Anaconda Navigator is a desktop graphical user interface that comes with the Anaconda distribution and allows us to run programs and manage anaconda packages, environments, and channels without having to use command-line commands. Packages can be found on Anaconda.org or in a local Anaconda Repository using Navigator. On Installing Anaconda on the system,the program folder will show various applications such as Anaconda Navigator,Anaconda Prompt,Jupyter Notebook ,Spyder,etc.

How to install a Package in Anaconda

A package can be installed in Anaconda by using either of following commands:

Why should I use Anaconda instead of traditional Python distributions for data science?

It has more than 1500 Python/R data science packages. Anaconda simplifies package management and deployment. It has tools to easily collect data from sources using machine learning and AI. It creates an environment that is easily manageable for deploying any project.